A recent lawsuit filed against Nestle Purina PetCare Company is claiming that one of the company’s most popular dog food brands, Beneful, contains toxins that are poisoning and even killing people’s pets. The lawsuit, filed in California federal court earlier this month by pet owner Frank Lucido, alleges that thousands of dogs, including his three dogs, have become ill or died as a result of eating Beneful dry kibble dog food.

According to the lawsuit, Lucido began feeding his three dogs – a 4 year old German Shepherd, an 11 year old Labrador Retriever, and an 8 year old English Bulldog – exclusively Beneful 2 months ago. Within a month, all three of the dogs were sick with internal bleeding and liver dysfunction and one of the dogs – the Bulldog – died.  The post-mortem signs were consistent with poisoning, and the interesting part is that all three dogs were kept in separate homes, with the only connection between the three being the food they were fed: Beneful.

Lucido’s lawyers claim that there has been over 3,000 consumer complaints made against Beneful in the past four years, stories of dogs becoming sick or even dying of internal bleeding or liver failure after eating the kibble, but where are these complaints? A quick google search fails to bring up a list of these consumer complaints, so where are the lawyers getting their information?

While concerned pet owners should always pay attention to the food that they are feeding their beloved fur kids and keep an eye out for recalls, a word of caution against alarmist reporting and bandwagoning is called for here.  In looking at this case from an outside perspective, there are many questions raised.

The lawsuit claims toxins in Beneful are to blame, listing propylene glycol and mycotoxins as possibly harmful substances in the dog food.  This in itself is frustrating and an obvious source of lack of understanding of these substances, particularly propylene glycol. Propylene glycol is used by the food and pharmaceutical industries as an antifreeze when leakage might lead to contact with food. It is used to absorb extra water and maintain moisture in certain medicines, cosmetics, or food products. The Food and Drug Administration (FDA) has classified propylene glycol as an additive that is generally recognized as safe for use in food.

Toxicity with propylene glycol is rare, and would not only require a massive overdose of the substance, it would also manifest as kidney failure and NOT liver failure or internal bleeding.

Mycotoxins, on the other hand, are a possible culprit in Lucido’s case.

If a dog were to eat a commercial pet food contaminated with a disease causing level of mycotoxin, the result could be catastrophic. 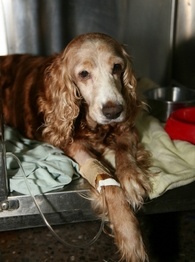 Symptoms of acute mycotoxin poisoning include…

These are the very same symptoms that affected and killed so many innocent dogs in 2005 and prompted an emergency recall.  That was the year Diamond Pet Foods of Gaston, South Carolina made and distributed a large batch of mycotoxin-contaminated dog food.

The difference is that the Diamond food tested positive for mycotoxins and was recalled by the FDA. Purina claims that Beneful has been tested and is clear.  The lawsuit has even garnered the attention of AVMA, which issued the following statement:

We’re aware of the class action lawsuit filed against Purina, but we do not have any additional information about the cases that may be involved. We’re not aware of any recalls of Beneful products, and have no records of Beneful recalls since we began tracking pet food and pet treat recalls in 2007. Purina has an FAQ on their website that addresses some common questions about Beneful.

One Reply to “Nestle Purina PetCare Beneful Dog Food – Who is to Blame?”