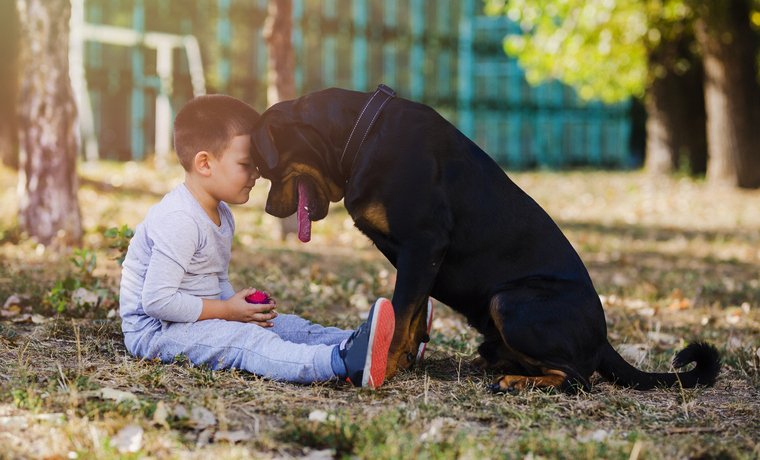 One of the most iconic guard dogs around is the Rottweiler. These dogs have helped humans for centuries. They’ve also gotten a reputation for being ferocious protectors. Today we take a look at the Rottweiler and learn a little more about this amazing dog breed.

The Rottweiler is thought to be one of the oldest herding breeds and even is thought to have been used during the Roman Empire. When the Romans were conquering the European continent, they brought herds of cattle to use for food. They needed a strong dog that would be able to herd and guard their cattle.

The dog that was left was named after the nearby town of Rottweil. During the Middle Ages, they were also adopted by local butchers to help protect their property and money. This happened until the railroad became the primary mode of transport for livestock. Popularity and use of the breed diminished until the start of World War I. Rottweilers were then sought out as police and service dogs.

The Rottweiler saw use in both World Wars and in 1931 it was officially inducted into the American Kennel Club (AKC).

The Rottweiler’s physical appearance is iconic. Most any dog fancier would know a Rottweiler at first sight. They have an incredibly strong-looking build that can be very imposing for unwelcome guests. They have a deeply black coat with tan or brown markings on the case and underside. While the Rottweiler is a physically impressive specimen, you might not see how well balanced the dog is. The powerful neck and legs of the Rottweiler is held by a very straight and strong back.

Their coats have both an outer and undercoat, though some dogs who are used to warm weather may have lost the undercoat. Even if the dog has kept their undercoat, it won’t be visible. You should see a black coat with mahogany or rust-colored markings. The AKC actually specifies that the breed needs a mahogany dot above the eyes, and the cheeks, and on the side of the snout to be considered standard.

The Rottweiler is considered to be a relatively disease and problem-free breed. They can however develop osteosarcoma. This is a condition that causes tumors to form in the bone of an animal. Osteosarcoma is by far the most common cause of early death in Rottweilers.

Any reputable breeder will have their dogs tested to ensure that these conditions are less likely to develop.

Grooming a Rottweiler isn’t very difficult at all. They need very minimal maintenance for most of the year. This will include brushing at least once a week. You should be brushing their teeth and checking if their nails need to be trimmed weekly as well.

About twice a year, Rottweilers go through a period of shedding where you should be brushing them more often. This period occurs usually in the fall and spring as the dog acclimates to the changing weather. While a Rottweiler is in this shedding period, daily brushing is a good idea. This will help remove any loose fur and keep it off your furniture and clothes.

Rottweilers were used long ago to help herd cattle and protect the household. The reason they were used is that they are agreeable. If you look at the media’s depiction of the breed, you might not see how Rottweilers are eager to please their master. Many depictions in the media show Rottweilers being a dangerous breed. This couldn’t be further from the truth.

While any dog that has been mistreated can show potentially dangerous behavior, a rottweiler raised in a loving family will thrive. They are calm and confident dogs. They usually can take a passive role in situations to see how they may play out. This is because they have the self-confidence to know they can handle themselves in any situation.

Rottweilers also are very alert and want to be put to work. They are active and still have a strong herding and guarding instinct. This makes them great family dogs, but they are usually suggested for families that do not have small children. The Rottweiler’s size alone means they can accidentally knock over small children.

Rottweilers are beautiful and hardworking dogs that want to please. They like to work hard, but they are also very loyal companions.