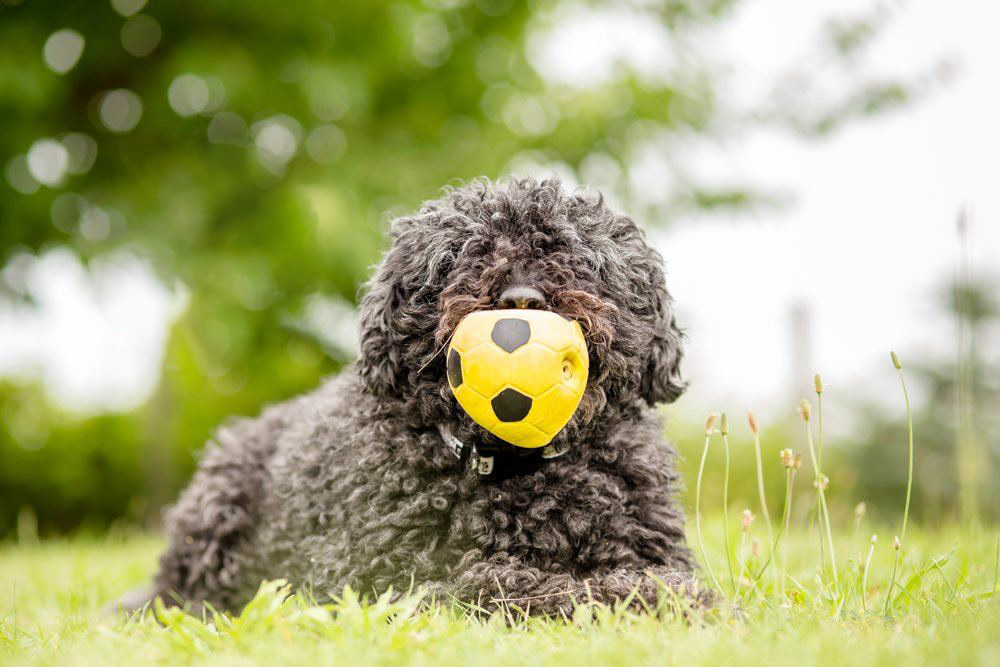 An American dog breed named after the Catahoula Parish in Louisiana, the Catahoula Leopard dog truly has a unique look. Tough but strikingly beautiful, they can have a spotted, brindle, solid or patched coat of many colors. Their eyes may be blue, green, brown or amber. They commonly have eyes that are two different colors, or even two different colors within the same eye. This tough dog was bred to work in swamps and forests. They are a mix between Native American dogs, Spanish Mastiffs and Greyhounds. They were bred to track and drive feral hogs and cattle to be butchered. Protective of their families, Catahoulas are a hard-working dog that needs at least an hour of exercise every day.

What is most noticeable about Puli dogs is their long, corded coat that looks like it is full of dreadlocks. Its distinctive coat takes about 4 years to grow completely and it comes in solid colors of rusty black, black, all shades of gray and white. It is his corded coat that makes him look larger than he really is. In fact, the width of the coat across the back can be 3 times wider than the actual dog is. At about four years old, their coat reaches the ground. The cords on their head fall over the face and veil the eyes. Also known as the Hungarian Water Dog, the Puli is still used for herding sheep in its homeland. The Puli loves his family but also loves to bark.

Coming straight out of South Africa, is the Rhodesian Ridgeback. Its distinguishing characteristic is the stripe of hair on his back that grows in the opposite direction. This makes it look like the Ridgeback has a long Mohawk on its back. Ridgebacks are a mix of European hunting dogs and African dogs. Strongly athletic, the Ridgeback was used to track lions in the jungles of Africa. This is why this large, powerful dog was once known as the African Lion Hound. Today, Rhodesian Ridgebacks are sometimes still used for hunting and can be found competing in agility and obedience competitions.

A herding dog that originated in Hungary, the Mudi still is used to work sheep and cattle herds. Closely related to the Puli, today the Mudi is bred for work, companionship and show. A medium-sized dog, it is an intelligent and faithful companion. There are only a few thousand Mudi dogs in existence today. This energetic, athletic dog excels in obedience work and agility courses. Their stamina and smarts makes them ideal candidates for search and rescue work. Vigorous barkers, the Mudi dog also loves to dig and they are quite good at it.

Also called a Russian Wolfhound, the Borzoi was developed in Russia as coursing and hunting dogs. They have a tall, lean body with a long narrow head and a silky coat. The word Borzoi means “swift” in Russian. A Borzoi is a cross between an Arabian greyhound and a sheepdog. They can weight up to 120 pounds and grow to be quite tall at 32 inches. Borzoi are known for going after rabbits, foxes and wolves. Later in history, they became popular as a companion for royalty across Europe. Designed for speed and endurance, the Borzoi is elegant, graceful and athletic. Loving and gentle, the Borzoi is a responsive and loyal companion.

An ancient sheep-herding dog that originated in Persia, the Bergamasco Shepherd has been around for almost 2,000 years. The Bergamasco is characterized by its long, thick and shabby coat. This medium-sized dog has a rustic appearance of sorts. His thick coat is unlike any other dog. Its coat has mats or flocks that grow over the years to reach the ground. The color of his coat can range from gray, to silver gray to coal. Patient and tolerant, the Bergamasco Shepherd is great with children. A great watchdog, the Bergamasco Shepherd is a very intelligent and well-balanced breed. It has even been used as a therapy dog for the handicapped.