In humans, we now know that certain medical conditions, such as heart disease, are exacerbated by chronic stress. Researchers have also determined that long-term stress can contribute to medical and compulsive disorders in pets. Diseases such as obsessive behaviors, irritable bowel syndrome, eating disorders such as obesity and anorexia, gastric dilatation volvulus (bloat), noise phobias, destructive behaviors,and separation anxiety have all been found to have a chronic stress component in dogs.

Other than studies done on unwanted behaviors that endanger the human-animal bond, there has been relatively little research published regarding stress and its effects on companion animals. While the assumption has been that the effect of stress on dogs and cats is not much different than other non-human animals, this may not be the case. Well, when it comes to mammals, dogs and cats are unique because of their bonded relationships with humans, their outgoing social natures, and the human-centric environments (i.e. human homes) in which they now reside.  As dogs and cats have moved from the barnyard into the family home, one would surmise that they would have less stress than their ancestors, but the truth is, dogs and cats still have stress in their lives. In fact, some veterinarians would argue that even though environmental stress is lower for modern day companion animals (i.e. predation, starvation, injury and disease), overall stress levels are higher. In addition, modern-day sources of stress, such as boarding, a visit to the veterinarian, a new baby, tight restraint, long-term confinement, boredom or inactivity, or noises from fireworks or guns, are ones that dogs and cats may not have well-developed defenses against, and are often situations from which they cannot extricate themselves.

Perhaps it would be helpful to define stress and how it is managed by the body.Stress has been defined as ‘the sum of all nonspecific biological phenomena caused by adverse conditions or influences. It includes physical, chemical, and/or emotional factors to which an individual fails to make satisfactory adaption and that cause physiological tensions that may contribute to disease 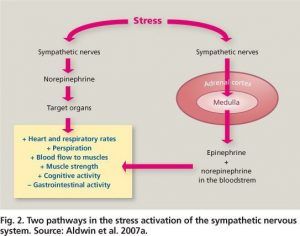 It is important to know responses to stress and chronic disease might have predisposing nutritional factors, such as a nutrient deficiency, imbalance, or toxicity. I also need to know whether or not supplementation of a given nutrient is important in helping a pet to manage stress. 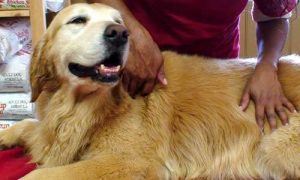 As well as you care for your pet, it is still likely that your dog or cat encounters daily stressors that are unavoidable, but it is possible to minimize the effect stress has on your companion animal with a combination of exercise, nutrition and holistic treatments. Valerian, chamomile, and inositol are all calming for dogs that are going into a stressful situation, such as boarding, the veterinary hospital or having visitors in your home. Pheromone diffuses, sprays, or collars are effective stress reducers for dogs (D.A.P). Alcohol-free Bach flower Rescue Remedy are an option to try – you can pick specifically animal formulated flowers that are safe for your pet. These remedies can be given before, during or after a stressful event to help your pet to cope emotionally. You can also practice pet massage or schedule a massage for your pet.  To develop the best combination of holistic stress-reducing treatments for your pet, enlist the help of a local alternative-medicine or holistic veterinarian.

Davenport. 2002a. Exploring human interaction and diet effects on the behavior of dogs in a public animal shelter. J. Appl. Welf. Sci. 4:253-273.

Davenport. 2002b. Effects of a program of human interaction and alterations in diet composition on activity of the hypothalamic-pituitary-adrenal axis in dogs housed in a public animal shelter. J. Am. Vet.