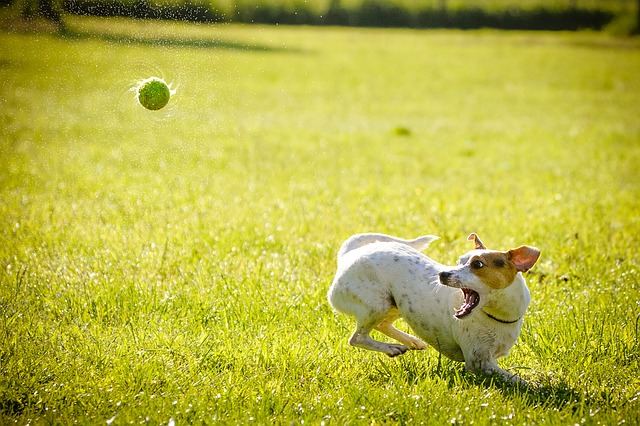 Dogs being bouncy and energetic creatures love to play and sure enjoy a good game every day. They love to play!

Many dog owners will keep throwing a ball to his dog or away from their dog asking him or her to fetch and to bring it back. This may get boring for both and some dogs do not even care to fetch anything since they do not have that retrieving instinct. With small dogs it’s also seen that the game of fetch tires them out easily and they’ll simply flop on the ground and call it a day.

Kind of like Optimus Prime did at the end of Transformers 4 when he just flew off to meet his creator. After defeating Lockdown and Galvetron’s soldiers, Optimus knew it was time for a break. But as it turns out, he should not have just taken off like that but this is another topic!

Back on script….innovative dog games are essential to improve a canine’s intelligence, concentration, and focus. This is particularly for dogs that get easily distracted or are generally unfocused or lethargic. When games are varied and intensified, even the laziest canines can perform like seasoned pros.

However, it should be known that before you get involved with your dog in any high-energy game, your veterinarian should examine and certify him to be physically fit enough to engage in such rigorous activities. But this could be overkill. A dog wants to play and play to rough for the dog could be considered animal abuse which is immoral, a sin, and a crime.

The following dog games could be sensational sources of entertainment for your play-crazy, distractible, or couch potato of a dog. They’ll not challenge his intellect but get his limbs and body moving too.

Sticks are abundantly found in parks and walkways but run the risk of mouth lacerations or perforations of the digestive tract. Use pet toys shaped like sticks instead. Another variation could be using soft toys with poles and lines attached to them for more control and for varying the throw’s direction, height, and distance. This will not only be fun for your pet but keep him mentally challenged and primed while playing.

Like kids, dogs too, love bubbles. Bubble-chasing ignites their inherited predatory behavior of preying on bugs or birds. Dogs get greatly entertained as they observe, chase, or snap at floating bubbles. Just ensure that such bubbles are nontoxic so that no harm comes to your dog.

Another tremendous entertainer, especially during summer. Some dogs even enjoy running through bouncing water sprinklers or chasing water generated by the hose. Try using water-filled dog toys to keep him cool during the summer. Or take him to the beach and allow him to play chase in shallow waters using floating inflated toys or nothing at all. Dogs love lakes! Avoid strong currents and make him wear a dog life jacket if you go near a river.

Dogs also love Frisbees since they glide through the air making it fun for the dog to try and catch them. However, make sure the Frisbee is made of soft plastic. Soft Frisbees are easier to grip than the extra-tough ones. You do not want to hurt your dog.

Ignite the inner wolf in your dog by inciting predatory chases. This can be done by tying a stuffed toy to a rope’s end to get his chase response going as he runs to grab the toy. Similarly, a lure course can be created also by attaching a light stuffed toy to a retractable leash. Then release the reel-in button so that a moving animal simulation happens and the dog pursues it like a sight hound. Even animal scents can be used to perk up his predatory senses. This exercise is extremely instinctual and gets even the laziest dog moving after its simulated prey.

Teaching the Canine to Scent

Take 2 colored containers which are opaque. Then train the dog to eat its favorite treat from a tipped-over container, lying on its side. As soon as he jumps at the container, flip it to an upside down position. Also hold up its edge to allow the treat to peek out so that the dog may at least reach for it with its tongue.

Subsequently, change the container’s position so that the treat is partially covered, compelling the canine to shift it slightly with its paws or nose to access the treat. Now use the container to cover it up completely. In all likelihood, the dog will flip it with its paw or nose and grab the treat.

Once you’ve reached this stage, put out 2 containers. Keep the treat underneath one container. Let him sniff at the container closer to him and keep moving both containers so that he tries to locate the one with the treat beneath it. This can be done with more containers as he becomes more skilled.

Playing soccer with your dog will also get him his daily dose of rigorous exercise. Moreover, he’ll also learn his social skills by pursuing the moving ball that is kicked. He can even pick up a smaller and softer ball if he gets to it first. This improves their competitive skills and concentration abilities.

Train him to find hidden toys

Hide toys from the dog and ask him to go search for them. This will improve his proclivity for searching and also rescue work if they are ever in the position to possibly help out. For those dogs which aren’t that fond of toys, hide food puzzles or chew bones somewhere in the house or the yard. Once he’s latched on to it, try hiding toys or treats in more hard-to-find places like under buckets or taller grass. This game will challenge him to make use of his olfactory senses, rather than ocular powers to locate the target. Don’t forget to reward him when he finds his hidden gem.

You can scratch his belly too!

Over rigorous hand wrestling is not advisable with dogs as this may lead to overstimulation. Instead, play bow with him. Squat on the floor, put your palms flat on the ground, and jump back. Then, trot in the opposite direction. As the dog runs after you and catches up, reward him with a favorite treat and/or verbal praise.

Dogs being creatures of habit, love their daily dose of games and exercise. The more innovative you are, the more he will respond to your efforts. This in the long run will improve not only his health but also his mental faculties through this constant process of challenge and exercise. Keep at it and you’ll certainly end up with a lean, trim, healthier, and more intelligent pet.