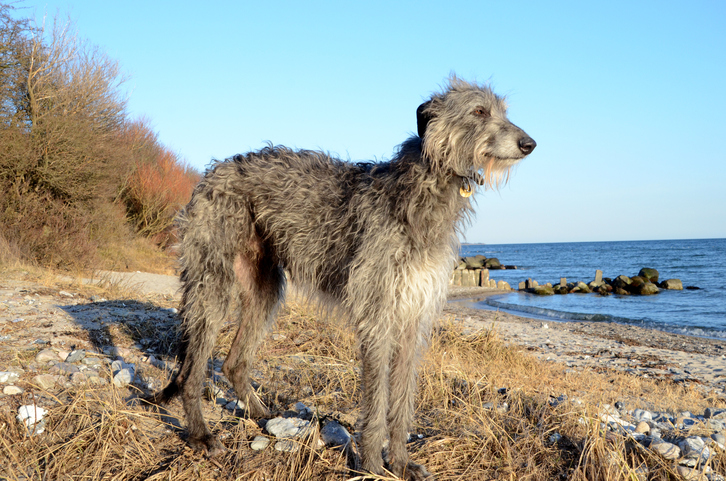 In 2020, we saw the rare Scottish Deerhound (SD) thrust into the limelight after it won at the National Dog Show. What’s the deal with this majestic and gentle breed? Let’s learn more about the SD.

History of the Scottish Deerhound

The SD as a breed can be traced back to as early as the sixteenth century, but dogs that resemble the SD go back much further. Similar dogs have been depicted in art going back as far as 1,200 years ago. The breed was used for “coursing” which is the hunting of animals with a dog. These dogs would specifically use speed and sight for hunting.

As the name suggests, the SD was used to hunt red deer. They would normally be brought close to a deer and released to run them down. Normally these chases were not long with a normal chase lasting just minutes. The dogs were prized for centuries because of their skills and speed. Eventually though, this style of hunting went out of fashion to be replaced with rifles. For this kind of hunting, only one tracking dog is required. Toward the end of the nineteenth century, the breed was really only kept by enthusiasts as the dog didn’t fit into the social system anymore. Even today, the American Kennel Club rates this breed as one of the less popular of their 196 officially recognized breeds.

The SD is actually one of the tallest dogs around. They are very similar in build to the Greyhound but are much larger and are heavier boned. They can grow to be 32 inches tall and up to 110 pounds. The SD also has a much rougher coat than the Greyhound. While the Greyhound’s coat is straight and aerodynamic, the SD has a coat for survival.

They had to survive the cold and damp climate of the Scottish highlands. This gave them a coat that can protect them from such weather. They also have smaller ears that are usually folded back. This would help protect them while running through the woods hunting prey. Their normal coloring today is of grey or blue-gray. Historically, the breed could have been red, yellow or brindle, but those colors have been lost.

The SD is a true sighthound. This means that they have a real prey drive. They love chasing and barking at smaller game. For excitable as they are, you would be just as likely to see them snoozing on the couch. They do need a lot of exercise, but while not exercising, they are conserving their energy.

The SD is an eager-to-please breed. They are super friendly dogs who can make a great addition to any family. They love people and can get along very well even with small children. Though, due to the SD’s size, they could inadvertently knock children over and should be supervised. They’ll get along well with another SD. Two dogs can keep each other occupied and help get their energy out.

While the breed is known for their explosive energy, they need to be given an outlet or bad behaviors can surface. A Scottish Deerhound who is not exercised well can become destructive or develop other problems.

Speaking of exercise, the SD needs a lot. They also need a very specific form of exercise. Just taking them on leash around the neighborhood is not going to be enough to get their energy out. They need plenty of room, so that means either building an enclosure that’s large enough for the dog to run or taking them out to run off-leash as much as they want. If you’re an apartment dweller, the SD is probably not the dog for you. The breed runs just because they enjoy it. To deprive them of this simple joy will not make a well-adapted dog.

The SD will also need a high-quality diet. They are large, so they should be fed proportionally, but watch for obesity. The breed needs a lot of exercise to stay happy and healthy, but as they age they are happy to sleep parts of the day away. Be sure to keep an eye on their weight and cut back as needed.

While obesity can be an issue for this breed if they’re overfed, you can also watch out for other ailments:

Winner of the 2020 National Dog Show

Each year, the Kennel Club of Philadelphia hosts the National Dog Show. In 2020, 600 dogs competed for the top prize, Best in Show. This year, despite the stands being empty due to COVID-19 restrictions, a Scottish Deerhound named Claire beat out the other six dogs that rose to first place in their respective groups. Claire was described as having an easy gait but elegant way about her.

While the breed may be less well known, this win is certain to help the breed’s popularity.