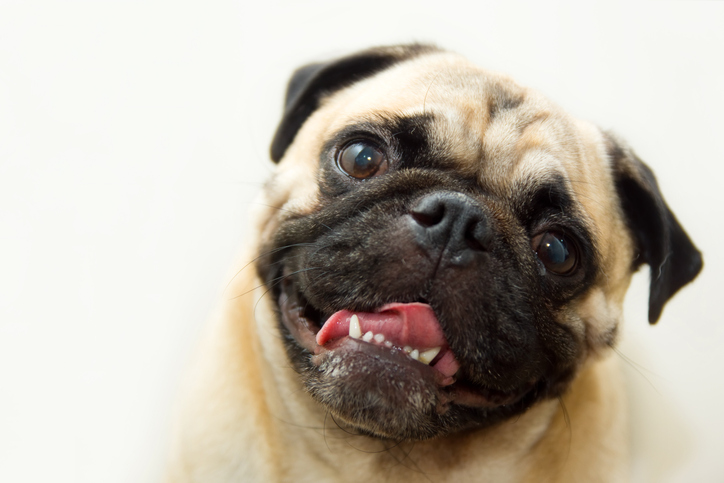 The Pug is one of the most easily recognizable dog breeds around. With their short muzzle and distinctive coloring, they are hard to miss. Today we dig a bit deeper into this breed’s history and care for one.

The Pug originates from China. They were bred as companions for the ruling family of China. Eventually, the breed made its way to other parts of Asia, and in the 16th century the Pug made their way to European courts. They were a favorite in the Netherlands and by 1668 was a part of England’s court as well.

The Pug enjoyed its time in the high courts and eventually made its way to the United States. It was recognized as an official breed by the American Kennel Club (AKC) in 1885. The Pug is still a favorite today and even won a World Champion award at the 2004 World Dog Show.

Pugs are a small breed, but they are solidly built. They grow to be between ten and thirteen inches tall at the withers and between fourteen and eighteen pounds. They are known to come in three different colors: silver, fawn with a black face or all black. All three colors are accepted as official by the AKC.

One of the most beloved features of the Pug is their face. They have incredibly expressive faces. Their eyes twinkle and their noses wrinkle. This gives the pug a very human-like range of facial expressions. Pug owners say they are some of the most charismatic dogs around and are especially known for their wrinkly faces and an underbite.

While Pugs are fun and vibrant looking dogs, their personality shines as well. Pug fanciers say they make an ideal house dog. They are small in size, but they are often described by using a Latin phrase, multum in parvo. The phrase roughly translates to “much in little.” These dogs may have a small physical presence, but they can fill a room with personality.

Pugs are small, strong-willed, and hardly ever aggressive. Their short but sturdy build actually makes them a resilient dog in a home with children. The Pug is known to get along well with children and can even stand up to a child’s curious handling.

Pugs are also known to be second shadows. They love to be a companion, and they’ll look to be with you at all times. This means they might be under your feet if you’re in the kitchen cooking, but they’ll also be up on your couch cushion before you get the chance to sit down. If you do decide to get a Pug, be ready to add that second shadow to your life.

The Pug is what’s called a “flat-face” breed. This calcification is given to dogs who have a rather small snout. The Pug’s short nose is one of its attractions, but it is also a source of issues.

Some common issues a Pug might have to deal with include:

A scratched cornea is usually just the result of their snout not sticking out as far as other dogs and they ran into something on accident. A Pug’s eyes are much more accessible since their nose is much shorter than other breeds.

The other two issues are a bit more serious. Pugs are known to sometimes have bulging eyes or have eyelids that fold inward. These are both issues that affect their vision and can cause pain as the dog grows older.

A small snout also means Pugs have a harder time cooling themselves. Humans sweat to cool themselves, but dogs pant. Because the Pug has a smaller snout, there is less air flow over their tongues when they pant. They can’t cool themselves as well as other breeds, so overheating is something to look out for.

Pugs often live a rather sedentary lifestyle as well, so they are prone to obesity. Though, this can be mitigated with proper diet and exercise. Of serious note, Pugs can also suffer from spine or bone abnormalities. Any responsible breeder would run genetic testing to ensure their dogs are less likely to develop these issues though.

A Pug’s coat is short, smooth, and glossy. This means they won’t need much beyond a weekly brushing. What ease they have in coat maintenance, they make up for in other ways though. Because Pugs have wrinkled faces, it is necessary to clean each wrinkle to ensure there is no irritation or infection present. If not done, a Pug can develop dermatitis.

Pugs are small in stature, but they are sure to fill your home with joy. They make great companions for adults and children alike. If you are up to caring for this playful little breed, they are certainly one who can bring a lot of fun into your life.