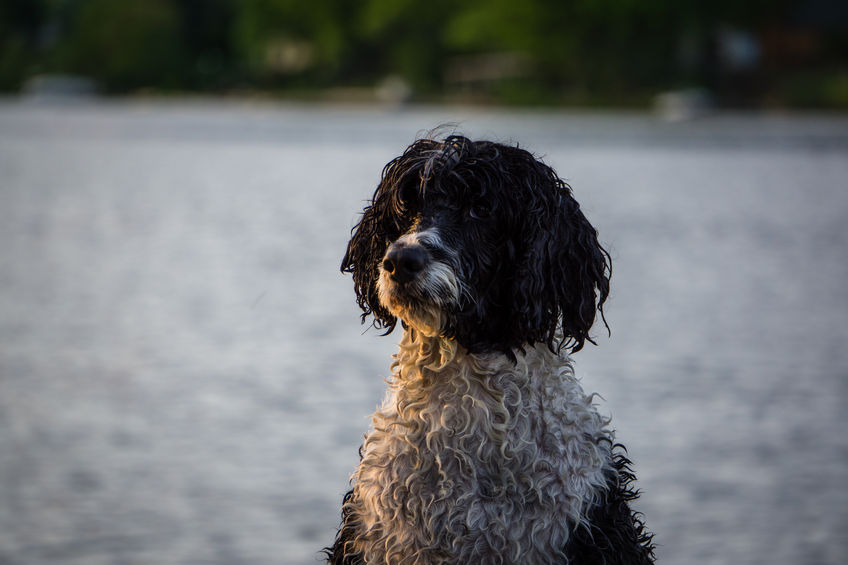 Are you on the lookout for a midsized dog that is smart and eager to please? If so, you may enjoy a Portuguese Water Dog.

This lovable breed is increasingly popular for its high energy and loyal nature.

Read below to learn more about the Portuguese Water Dog.

History of the Portuguese Water Dog

The first thing to mention is pretty obvious, but the Portuguese water dog originates from Portugal, namely the Algarve region. At the earliest times of history, the dog was called a “water dog” and it enjoyed high status in society. There were strict penalties in place for anyone found to have killed a water dog.

The earliest written account of this breed dates back to 1297 where a monk describes the dog with its traditional trim. The trim also rose to the breed sometimes being referred to as a “Lion Dog,” as it’s trimmed hindquarters made its shaggy front look like a mane.

The Water Dog is said to be a rather ancient breed, with the modern-day Poodle, Blue Terrier, and Irish Water Spaniel being possible ancestors.

Fisherman loved keeping these dogs because they are great in the water. They were used to retrieve broken fishing gear, herd fish, and would even be used to send messages between ships or to the shore. The Portuguese Water Dog worked on boats until relatively modern times.

The Portuguese Water Dog was favored by Portuguese fishermen for its stout build and obedience. These dogs would have no problem putting in a full day’s work alongside its master. And that’s what they did. These dogs love being in the water, and a small webbing between the toes allows them to be incredibly efficient in doing so.

These dogs are seen as “biddable.” They are relatively easy to train, and they live to please their master. They are also used to putting in a day’s work, so they will need lots of exercise.

These dogs are seen as being solidly built. They should be slightly longer than tall but should have a muscular appearance as well. They should also have a thick tail that is often times used as a rudder once they enter the water.

These dogs can come in a few different colors. Black or white or a combination thereof is most common. Though there are also brown water dogs as well. All water dogs have a thick planted coat that is mostly even. They do not have an undercoat.

Portuguese Water Dogs can have two different types of coat. The first is curly while the second is wavy. Curly coats have compact, cylindrical curls that look to be tightly knit. A wavy water dog does not have curls but rather hair that gently falls in waves. They also have a slight sheen to their coat.

These dogs can be groomed in two different ways: Lion Clip or Retriever Clip. Lion clip is named so because it lets the dog resemble a lion. The hindquarters are shaved very short while the front is left to grow. The cut makes the dog look like a lion with a large mane.

Retriever clip is when all fur is trimmed to less than an inch. Though, for both styles, the tails are left full length.

How to Care for a Portuguese Water Dog

The first consideration if you are thinking about getting a Portuguese Water Dog is if they will fit into your lifestyle.

They love people. Water dogs love to be in the home with its family. They will become bored, however, without enough exercise. It is suggested that a water dog be given at least 30-60 minutes of exercise a day. This can be as easy as playing a game of fetch in the backyard, or feel free to take your water dog to the beach for a dip. You really can’t wear these dogs out too much!

Which lead to another important consideration. Water dogs need daily exercise, or they’ll become destructive. But Portuguese Water Dogs are adaptable too. They are even known to be happy in an apartment if they are given enough exercise.

You’ll obviously want fresh, clean water available for your pooch at all times. They’ll also live well on a high-quality dog food. While some people are happy buying commercial dog food, water dogs will live just as well on homemade food too.

Treats are a great part of positive reinforcement training, but some water dogs are prone to becoming overweight. Just like with humans, consider calories in vs. calories out. If your dog is not exercising as much as they maybe should, they won’t need as many calories throughout the day.

Portuguese Water Dogs are sure to fit in just like another member of the family. But they will need to be groomed regularly.

Many people like them because their coats are hypoallergenic, meaning that they produce much less dander than other dog breeds. They also need to be clipped. You can bring your water dog to a groomer to be taken care of or choose to do it yourself. Either way, weekly grooming and the occasional bath should keep your water dog clean and happy.

While the Portuguese Water Dog is not one of the most famous breeds, it has become a bit more popular. No doubt this had something to do with former president Obama’s purchase of two.

Bo and Sunny are the two dogs that the Obama family brought to The White House. The Obama’s decision to not adopt these dogs garnered some criticism. However, most of the reception was overwhelmingly positive.

Can a Portuguese Water Dog Be Right for You?

If you’re ready for a companion that thrives on making you happy and likes the outdoors, the Portuguese Water Dog just might be the right dog for you.

Look into the American Kennel Club to find breeders in your area.