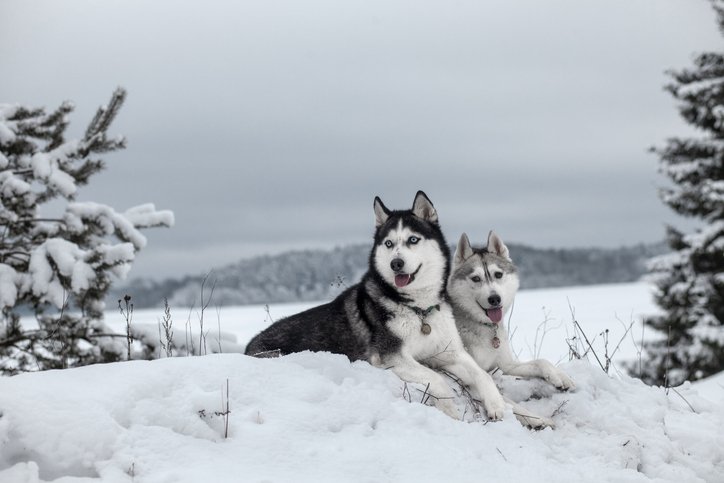 For you, winter is probably a time where you would rather pour a cup of something hot than go outside to take your dog for a walk. However, there are a number of dogs though that would like nothing better than to feel the snow beneath their paws.

Here are our top 7 dogs who love the winter:

No list of winter-loving dogs would be complete without the Siberian Husky, so we threw them at the top of ours. This breed has a very thick double coat that allows them to stay well-insulated from even the coldest climates, which is good because they only weigh about 60 pounds.

They have an abundance of energy as well. This is why they’re commonly used as sled dogs. The Husky has been specifically bred to help humans survive in the northernmost arctic regions. The breed has a strong pack mentality and requires an equally-strong human leader, or they’ll certainly choose their own leader amongst themselves.

The Alaskan Malamute can be thought of as the Siberian Husky’s bigger brother. They have the same thick double coat, but the breed is about 20 to 30 pounds heavier. The heavier weight means they can haul more than a Husky, too.

Their ability to pull more meant that a sledder would need fewer dogs to pull the same load. This could be why the Malamute is much more of a companion dog. While Huskies rely on pack order, the Malamute will not enjoy the company of other dogs as much. They will however take over your couch and demand you join them.

Hailing from the Swiss Alps, the breed was developed by monks to help find lost travelers on their way to Rome. Between the Swiss and Italian border, one could easily get lost in the 40-foot snowdrifts. The Saint Bernard was the savior of many a lost traveler who would then recover at the Great St. Bernard Hospice.

Moving from our largest to our smallest, the Tibetan Terrier is next. As you can guess, the breed comes from Tibet where it was bred by monks as a kind of good luck charm. The Tibetan Terrier would never have been bought or sold as you could only be gifted one. Because of this, they were known as “holy” dogs that would bring its owner good fortune.

The breed is known for its big, shaggy coat. They only grow to be around 30 pounds, but their coats give the appearance of a much larger dog.

The American Eskimo Dog originates from Germany, oddly enough. They originate from the Spitz family but was renamed after the First World War due to anti-German sentiment. The American Eskimo Dog comes in three sizes that range from about eight to forty pounds. Normally, the smaller a dog is, the harder it is for them to remain warm, so the toy variety is likely, not great in the snow.

These cold-hardy dogs are very eager to please and insist on being part of the family. They’ll want nothing better than to take you out for a walk, then snuggle up with the family for a good movie.

The huge Newfoundland has a thick black coat that makes them wonderful at staying warm in the cold, but they weren’t bred for cold weather. They were actually bred for swimming. They’d commonly be used as working and water rescue dogs. They were so good at water rescue that one is said to have saved the life of Napoleon Bonaparte in 1815.

Males of the breed come in at just a hair less than 150 pounds, so the breed is often considered “giant.” It’s no wonder that they do well in the cold. They have the mass and thick coat to handle it. The breed also has distinctive webbed paws that make them great at swimming.

The Keeshond is a breed that comes from Holland. They are another breed that originates from the Spitz family like the American Eskimo Dog. Keeshonds weigh about 40 pounds, so they are a little smaller than others on the list. Their coat is their advantage though. Their thick double coat helps protect them from the cold, as does the even thicker mane around their necks.

How to Protect Your Dog From The Cold

The above dogs love to spend time in the cold weather, but they are also equipped to do so. These dogs all have coats that allow them to spend their time in the frigid cold. But not all dogs can do this.

What do you do if your dog isn’t ready for cold weather? It really depends on your dog and what they’re used to. Here are a couple of ideas you might be able to implement if you’re worried about your dog handling the cold:

Some dogs are built for the cold. If you live in a cold region and are considering a new dog, perhaps you should choose from the above list.