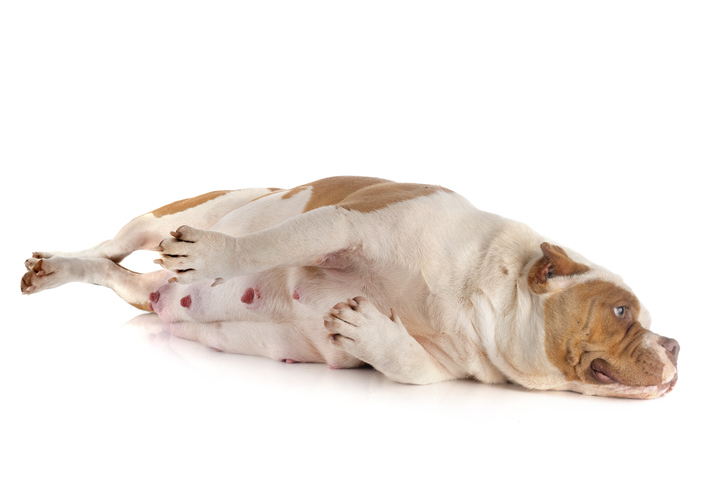 5 Signs That Your Dog Could Be Pregnant

People often don’t discover that their dog is pregnant until she is well into her last trimester. Logically, it’s not as easy as using an at-home pregnancy test to figure it out. Visiting her veterinarian is the only way to find out for certain. However, there are several signs that can help uncover the truth of whether or not your dog is pregnant. Dogs are pregnant for only about 2 months, so knowing as early on as possible is advantageous to ensure your dog has healthy puppies.

When a dog becomes pregnant, it is completely normal for her to be less active and to need more sleep. She requires more energy to manifest the changes happening inside her body and the upcoming birth. Being less physically active is all part of the scenario caused by her changing hormones.

When breasts begin to develop, it is a surefire sign that your dog’s body is getting ready to become a mother. Before pregnancy, her teats are little and the skin underneath is flattened. During the second of the third week of pregnancy, the milk production begins and they gain in size. In addition to the size, the color of the nipples becomes pink, which is caused by the increased blood flow to the area.

Nearly all pregnant dogs exhibit some sort of behavioral change during pregnancy. Some become extra affectionate toward their owners, as they may feel uneasy about the changes they are going through. Other dogs may just be slightly irritable during their pregnancies.

You may also notice that she doesn’t feel much like enjoying playtime. In fact, she might not want to play at all. Perhaps she used to like going out with you on the town but now would rather stay home. All of these things are completely normal for a pregnant dog.

This sign is pretty obvious. If your pooch has packed on the pounds and is walking around with a swollen belly, you had better plan for a litter of puppies pretty darn quick! Ideally, you should be able to detect a possible pregnancy during its early stages and plan regular veterinary visits to help your dog stay as healthy as possible during pregnancy.