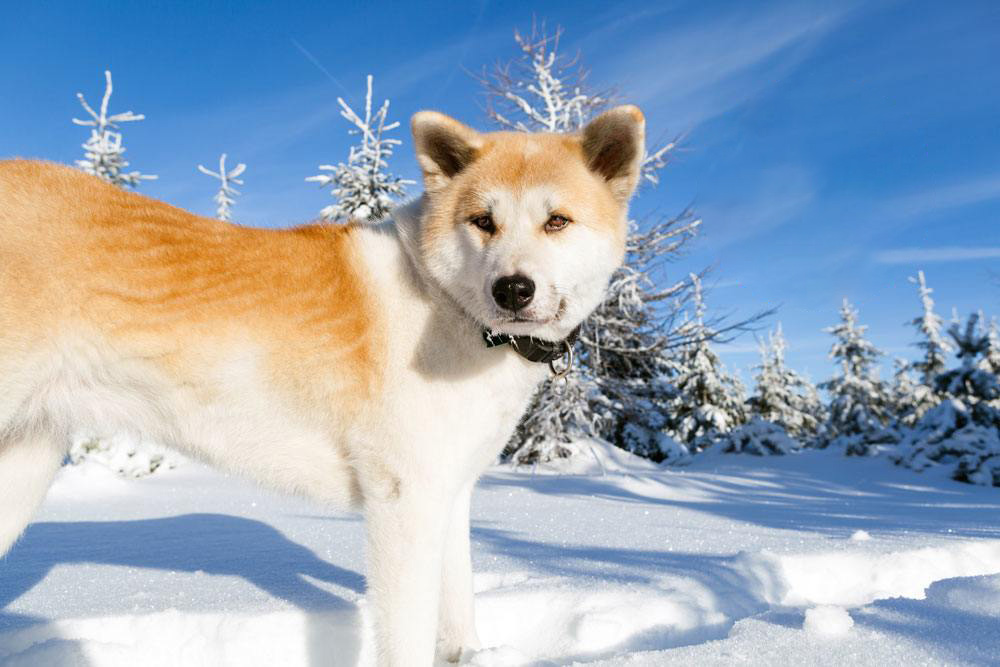 Many people feel like hibernating in their cozy homes when wintertime rolls around. Logically, most canines enjoy the comfort of a warm house as well, rather than venturing out into the cold and snowy outdoors. However, there are some dogs that thrive in cold and blustery conditions. If you love the cold weather and want a dog who loves it too, here are some dog breeds that will suit you nicely.

Akitas are quite fond of winter weather, likely due to their ancestry. Akitas hail from the cold, mountainous, and rugged Japanese island of Honshu. This large breed of dog is powerful, independent and dominant. In modern-day Japan, the Akita often works as a police or guard dog. Akitas have a wedge-shaped head that resembles a bear. They have a dense double coat that may come in many different color combinations, and a plumed tail that curls over his back. Even though the Akita loves cold weather, make no mistake, he is still an inside dog and he needs plenty of human companionship.

The Black Russian Terrier was developed during the Cold War by the Russian Army, to do military and police work in areas that have very cold climates. This giant breed weighs anywhere from 80 to 145 pounds. A guardian by nature, the Black Russian Terrier makes a great watchdog. His long, black coat can be become a bit of a mess at times. He has long facial hair that will drip water when he drinks and will get food in it when he eats. Another comical trait is that when he is sleeping, he snores loudly. Although a fenced-in yard will be appreciated for him to get enough exercise, he belongs indoors with the family he loves.

Originally bred to be a sled dog, the history of the Chinook includes a team of 16 of them accompanying Admiral Richard Byrd on his first journey to Antarctica in 1926. The Chinook was developed when a New Hampshire man bred a farm dog with a Northern Husky. He named one of the pups Chinook, and the breed kept the name. Nowadays, the Chinook makes an equally good family dog as a sled dog, and is known for his love of children. He can be recognized by his tan-colored thick coat, dark eyes, pointy or floppy ears and his saber-shaped tail. Perfect for those who love an outdoor lifestyle, the Chinook makes a great companion for hiking and backpacking ventures. They are also great performers in agility, herding, obedience and rally competitions. A perfectly loveable breed, the Chinook is not commonly found, so you may expect to wait up to a year to have a puppy of your own.

It’s pretty easy to figure out the roots of the Norwegian Elkhound. He was developed to track elk, bear and moose in the freezing cold Norwegian climate. A medium-sized dog, the Norwegian Elkhound weighs anywhere from 48 to 55 pounds. He can be recognized by his thick, protective gray coat and his bushy tail that curls over his back. Although the Elkhound is friendly and good-natured, he will let you know with his deep bark if someone is coming onto your property. However, just be aware that barking is one of his favorite things to do. This people-loving breed does like the cold weather, but he needs to live indoors to stay happy and healthy.